See the first post in this topic for appropriate background.

After 7 days of painstaking weighing and recording of all my food intake, along with macronutrient breakdown of those foods, I have collected enough data to start building some preliminary models.  Of course, 7 days is not enough to definitively conclude anything, but I thought I’d share what I have found so far.

My starting weight was 213.8 lbs, and my current weight is 206.0 pounds.  That amounts to almost 8 lbs lost the first week – no doubt this is primarily due to glycogen and water weight lost, but presumably a couple/few of those pounds were fat.  Unfortunately, some of that weight loss was probably muscle, although I have been doing daily, light resistance training on my Weider weight machine – I always do this near the end of my fasting window, usually around 15-16 hours without eating.  My rationale is that insulin levels are low and growth hormone is high, which aids in muscle preservation.

This is my dataset so far:

As you can see, the initial quick drawdown of weight has slowed, and I have been at 206lbs for a couple days.  Also note I have taken efforts to vary my macronutrient percentages a great deal – the past few days, I ate high carbohydrate percentages despite being hypocaloric (even the 2152 calorie day was probably hypocaloric, given my weight).

Base Model (Only Macronutrient Percentages)

Below is R-Studio output (the statistics package I’m using) for a linear statistical model I’ve built which compares the daily percentage of weight loss to the percent of fat, carbohydrates, and protein.

In this output, there are a few t hings to note:

Next, let us consider the same model, but add caloric intake to the list of explanatory variables: 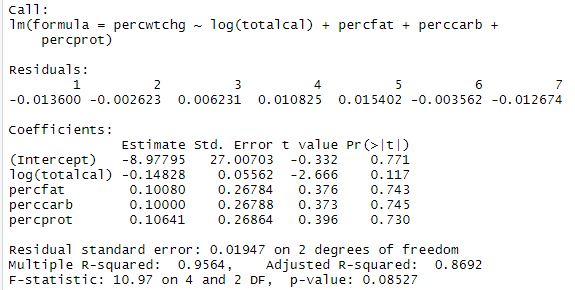 There are a few things to note here:

Given that total calories has so far been a better predictor of percentage of weight loss, how good is it by itself?  Here are the results:

As you can see from above, the p-value of this model is 0.2729 – the worst performing model of the 3.  Adjusted R-squared is 0.07924 – again, worse than the other two models.  So far, the calories-only model is worse than calories plus macronutrients.

So far, the best model to predict percent weight change is total calories AND macronutrient percentages.  I’m still very early into this process, and linear modeling might not be the best solution.  Rather, the best solution might be logistic regression, analyzing whether weight was lost on a given day given food intake.  Even still, a person can eat perfectly for days in a row, and not lose any weight – that’s just the nature of weight loss.  So ultimately, I don’t know what later models will look like, or what variables or techniques will be best for my personal results.

Below is a plot of my weight loss given caloric intake.  As you can see, I can both lose weight and remain the same, despite a wide range of caloric intake.  I have yet to gain weight on a given day.

I’ve noticed that a lot of high carb eating also involves high fat eating.  I suspect this is a problem, both from a biological perspective (the interplay between fat and carbohydrates during the metabolic process), and also from a calorie perspective – it is very easy to overeat when eating some of these things – for example, I ate a piece of toffee-cream pie yesterday, which was nearly 700 calories, half of which was fat.  When eating a low-carb/high fat diet, it is difficult to get 700 calories at once.

I also have not eaten many vegetables during this process.  This would have been helpful, at least from a hunger perspective, during my high carb days.  (Select) Vegetables also are a great tool in low-carb eating.

4 thoughts on “Fun With Stats: Macronutrients vs. Calories (Preliminary)”